Business communication has come a long way in the last few decades. With the evolving technology and constant urge to reach more and more people within time, the business industry is showcasing great efforts in enhancing their communicative methods. Keeping in notion the primitive requirement of communicating with humongous target audiences, the business industry has recently evolved with a very effective and efficient communication method that has changed the way one can ever imagine the usage of SMS services in mobile communication.

Known as SMPP SMS services, short messaging peer to peer SMS service is the new and trendy way of harnessing the benefits of SMS in the field of business communication. Initially developed to test the efficiency of messaging applications, SMPP services now stand as the one-stop target for business organizations which wish to communicate with thousands of customers within seconds.

The niche of SMPP SMS services

Generally called as SMPP SMS services, Short messaging peer to peer protocol is a way technological standards allow the communicators to communicate with thousands of individuals together. Speaking on the technical grounds, the SMPP SMS service serves as the medium through which the short messaging service centers (SMSC) and GSM Unstructured service data units (USSD) can interact with the messaging applications. Adding to the details, the standard practice involves a centralized messaging server that shall act as the pivotal point in communication. Apart from this pivotal point, there exist external messaging servers. While the former centers act as server sides, the latter deemed to be the client entity for the given transactional duration. Generally, the external entities target feeding SMSC with a huge number of messages which shall be then transmitted/ sent to the given target audience. However, the entire process demands proper application integration which can act as the adhesive layer between the above two entities and ensure proper communication within them. SMPP server API does exactly the same and allures SMPP standard protocol to attain its significance.


Thus, by employing SMPP services for communication purpose, one can send and receive messages to CDMA, TDMA, and GSM networked mobile phones in a convenient and effective mannerism. Since these networks hold well in all regions and pertain no geographical barriers, the communication can be performed without and hurdles and the SMSs can be sent rapidly to the recipients situated anywhere in the world. 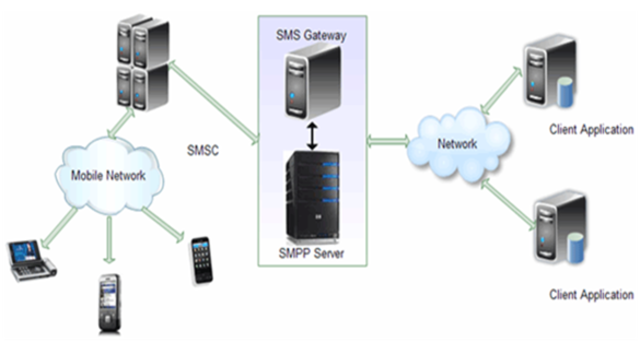 The messages can also be sent using restful APIs. However, these APIs lack efficiency in numbers. One can communicate with merely 100 – 150 contacts at once using restful APIs. This number is surely very small for institutions who wish to communicate with thousands of customers simultaneously. SMPP technology plays the role here. By choosing SMPP standards, the organization is featured to communicate with thousands of recipients in single shots and thus take business communication to an all new and enhanced stature. This power of communication with a humongous mob is bestowed to the services by methods of directly using telecommunication networks to transmit and receive messages. By employing direct telecommunication, the SMPP SMS can be sent and received by organizations from and to anywhere in the world without wondering about the geographical locations.

Though a recent technical enhancement, SMPP services have been encountering all types of telecommunication networks. May it be GSM, TDMA or CDMA; the SMPP versions cover all of them. Generally, version 3.4 is utilized in today’s business architectures. The below versions give up the strength to the services and are widely received by businesses as per their needs.

As per the systems demand, SMPP technology can be implemented for any business unit. Depending on the existing business architecture, the SMPP protocols may be applied and subjected to scalability in accordance with the business.

« All You Need To Know About GST
SMPP software and services: The ace of Business Marketing »